Community Foundations at the Heart of Building Broader Communities in Americas

The emphasis is not on punishing the individual at fault but recognizing our collective failure to support everyone who makes up our community.

The place has a familiarity but is entirely different from my own.The language is foreign, and I only speak enough for a greeting or two. I stick out like a sore thumb, a Caucasian among a sea of color comfortably in their homeland. No one seems bothered by this but me. 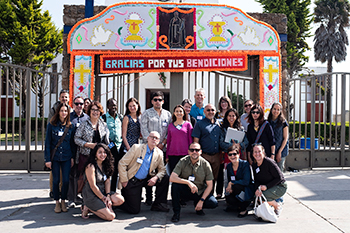 I’m in Mexico City, gearing up to tour through Morelos and Malinalco to see firsthand the efforts of Building Broader Communities in the Americas (BBCA), a transnational community foundation effort between Mexico and the U.S led by our friends at CFLeads, the Charles Stewart Mott Foundation, and Inter-American Foundation, and wisely facilitated by former President and CEO, Sandy Vargas of Minneapolis Foundation, who retired a few years ago. For years, this endeavor has been strengthening the relationship between community foundations on both sides of the border. In a time of rapid globalization, vulnerable populations are experiencing serious isolation in both the U.S. and Mexico, and BBCA is capitalizing on the collective good we can create across the Americas.

I’ve been here before—to Mexico and countless countries where I don’t look like the majority or share their language. In every situation, I was just a visitor. Not seeking a living wage to support myself or my family left behind in a homeland locked in a vicious cycle of poverty, violence, and corruption. I always know when I’ll be returning to the comforts of my home and family, unlike those who migrate with no certainty of when they can, or will, return. And over the course of the next couple of days, I’m about to learn an immense amount about the intertwining of our nations, the role of migration, and its positive and negative impact for both countries.

Participating community foundations in relationships across the Americas:

A Tale of Two Countries

Our two countries—Mexico and the U.S. are inextricably connected. Beyond immigration, economics, or border concerns, the bond is interwoven with a disparity between the two that implicates us far more than we appreciate to acknowledge.The poverty, violence, and corruption that drives Mexicans to migrate across the border is directly correlated to the drug cartels who fuel our drug epidemics in the U.S. and receive our trafficked guns. It’s the same border that allows NAFTA to successfully uplift U.S. corporate interests south of the border, but at the same time, national security policies deny Mexicans access to labor in the North. It’s complicated at best, but BBCA seems to be crafting a new bridge fueled by powerful relationships, deeper trust, and a commitment to community philanthropy.

If we want to make it easier for someone to stay in their home country while fostering self-sufficiency and a quality of life that aligns with their rich culture and deep heritage, look no further than your peer community foundations in Mexico.These foundations are paving the way to invest in opportunities of ingenuity, creativity, and the potential of interlinked communities. As one Mexican community foundations leader states, “disruptions create openings to approach the work differently... creates access to consider new thinking, and a need for deepening of relationships among those who are collectively feeling the brunt of disruption.”

The approach to community philanthropy is deeply impacted by local culture, and the same will be true in how we connect with new members of our communities. We cannot comprehend the means to improve the quality of life for those who we do not fully embrace, without understanding their culture and heritage. Many of us in community foundations agree relationships are the true currency of our business. Developing relationships with those who represent our local populations is critical because positive change moves at the speed of trust. And trust is a direct result of time-crafted, deepened relationships.

BBCA represents the most harmonious and truthful of relationships across borders, with community foundations on both sides working alongside CFLeads,Mott Foundation, Inter American Foundationand partners like the Council on Foundations, Community Foundations of Canada, and Public Equity Group. The Earthquake Fund that was launched after the September 2017 Puebla earthquake of 7.1 magnitude struck multiple regions of Mexico is an example of these cross-border relationships and deepened commitment to one another. Beyond disaster philanthropy though, BBCA is a genuine commitment to mapping the impact of migration on both the U.S. and Mexico but with a focus on the migrants themselves and the communities they leave and the communities they join. 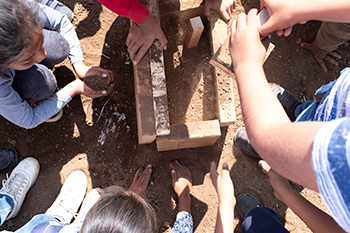 School Children continue to use methods to create their own adobe-like playdoh for hands-on experiences, initially introduced to help children deal with post-traumatic stress of the 2017 Earthquake.

Thanks to the experience and dedication of partners across borders, we can learn a great deal from Mexico and the U.S. that is also applicable to our mainland relationship with the U.S. Territories of the Virgin Islands and Puerto Rico, as well as Caribbean islands and the rest of the Americas. It also reveals critical insights to community foundations across the United States that experience population growth through migration or respond to disaster philanthropy around the world.

A person rarely seeks to become a migrant. Leaving one’s community, culture, and homeland is not desirable, but it is unfortunately a necessity for people who face violence and persecution across the world. This stripping of identity and sense of community is just one cost that migrants face as they seek a better future for themselves and their children. As community foundations, we are always striving to improve our communities and broadening the scope of how we define community is the pillar of BBCA’s work.

But how did a U.S. community foundation decide to get involved in this work? It was initiated by young millennial donors who have immigrated to the U.S. and maintain their connection to their homeland. By utilizing social media and communications they quickly found many donors within their community who were eager to help in the wake of the Puebla earthquake.

The challenge was that the CF had not built the relationships and network with its community foundations abroad making it much more difficult to help after a disaster. This reveals a need for all of us to recognize that community philanthropy exists everywhere. It may not be as formalized as in the U.S., but communities across the world have structures in place to help their own when in need.

What it Means Going Forward

My brief visit to Mexico has resulted in a great many questions. What can we learn by better involving our migrant populations in the work we do as community foundations? What can it teach us about the underlying needs that philanthropy can address in our own neighborhoods as well as the communities left behind by the migrants, likely in far worse condition than our own? 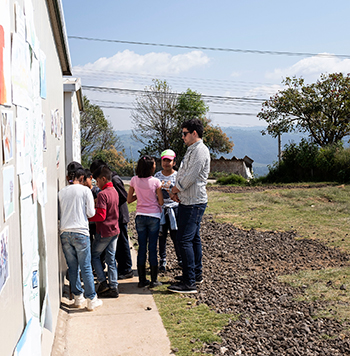 Juan Constain of Public Equity Group listens to students talk about their art and science projects funded by the BBCA partnership.

Sometimes the greatest thing to come from building relationships and networks beyond your own borders—with peers in the US and even beyond— is merely a rehearsal for something you don’t even know you are rehearsing. You never know when or how those relationships will materialize into something more. Politics aside, migration is complicated for both sides of the border. It is attempting to address local economic failures and a breakdown of security. It also fractures families, something that has consequences we may never truly grasp. An example, one State we visited—8 out of 10 Malinalco have family members in the US. Brothers and sisters who are living separate lives. Mothers and fathers working far away just to have a small chance of improving the lives of their families.

I was deeply impacted by the powerful relationships being fostered across Mexico and the United States compliments of BBCA. I am convinced we will continue to see this type of work and relationship duplicated by other U.S. community foundations seeking to better understand the Latinx populations in their own communities. Thus, I’m curious—what resonates with you? While I believe this matter to nearly all U.S. cities given the influence of migration and the demographic shift, I’m curious what you see happening in your own community, and what role, if any, the community foundation has played.

I leave you with this, because BBCA had me questioning in my own mind this conundrum—How you can you truly serve a community without recognizing all the inhabitants and their shared and unique life experiences? After all, it is the blending of many cultures, heritages, and histories of people that makes the American experiment not only unique, but a continuous journey of self-exploration and constant change.