In This Week's Edition of Snapshot…

Over the course of three days from April 11 – 13, 2018, the Council convened over 200 leaders to participate in our inaugural Public Policy Summit. Attendees engaged in thoughtful discussions around trending issues and the cutting-edge, innovative strategies that philanthropic organizations are utilizing to address those topics.

The plenary and concurrent sessions featured provocative and thoughtful insights from speakers who shared their stories and expertise on advocacy, civic engagement, and how to build political power. Summit participants enjoyed multiple networking opportunities, including a reception in the heart of historic Philadelphia at the National Constitution Center. 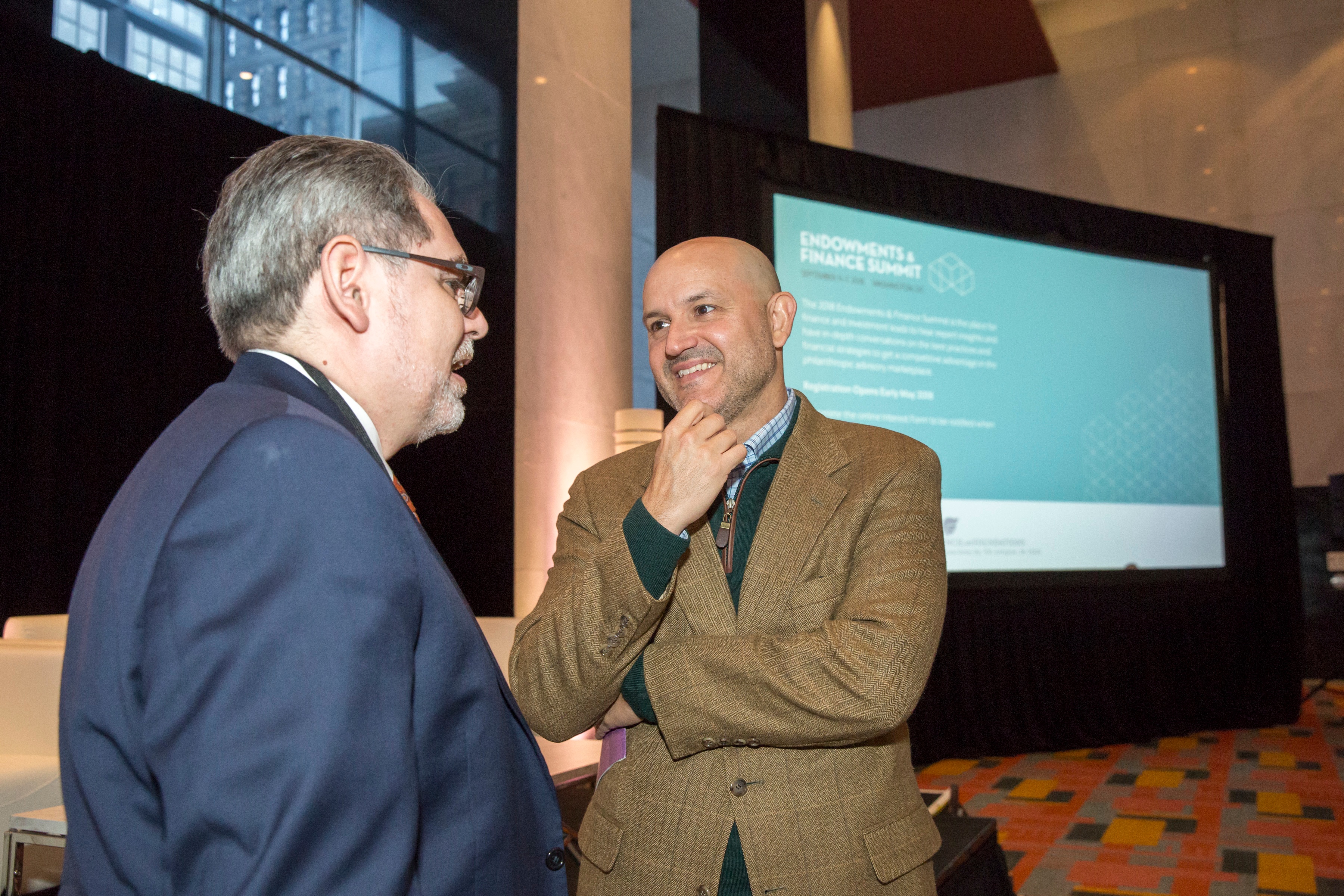 A full recap of the event is available on the Council’s website.

Shortly after President Trump signed a $1.3 trillion bipartisan omnibus bill into law in March, the administration began having conversations with GOP congressional leaders about pursuing what is known as a “rescissions package” to void as much as $60 billion from recently appropriated funds.

The presidential rescission—resembling the line-item veto, which was struck down by the Supreme Court in 1996—is a measure that was enacted under the 1974 Congressional Budget and Impoundment Act and would allow Congress to consider a resolution (requiring only a simple majority for passage in the Senate) that would identify specific appropriations to cut from the recently passed spending bill.

According to several current and former administration officials, White House Office of Management and Budget (OMB) Director Mick Mulvaney is leading the administration’s efforts to develop a proposal to submit to Congress for consideration in early May.

However, these efforts have been met with resistance from some senior Republicans in Congress. “We had an agreement with the Democrats… You can’t make an agreement one month and say, ‘OK, we really didn’t mean it,’” Senate Majority Leader Mitch McConnell (R-KY) said recently on Fox News, adding that “[President Trump’s] people were involved in the negotiation, they agreed to it, and he signed the bill.”

The Chairmen of both the House and Senate appropriations committees have not expressed particular enthusiasm about this approach either. House Appropriations Chairman Rodney Frelinghuysen (R-NJ) voiced pushback against the administration, saying, “My attitude is, your word is your bond,” on the matter of President Trump signing the recent spending bill into law. Newly named Senate Appropriations Chairman Richard Shelby (R-AL) has also indicated skepticism for a rescissions measure without knowing the details, stating that he “would like to see the particulars… It might be something serious. It might be something debatable. It might go nowhere,” adding that “Rescissions has never been a big thing over here [in Congress].”

It’s important to note that these conversations are taking place amid a flurry of other activity that has the potential to influence how things shake out. First, Rep. Paul Ryan (R-WI) announced last week that he would leave Congress, and therefore his post as Speaker of the House, when his term concludes at the end of this year. Speaker Ryan becomes one of 39 Republicans and 16 Democrats who have announced their intent to leave the House at the end of December. Beyond the implications this could have for the balance of power between Republicans and Democrats in the House in the next Congress, it leaves the top position in House Republican leadership open for others—like House Majority Leader Kevin McCarthy (R-CA), House Majority Whip Steve Scalise (R-LA), and former Freedom Caucus Chair Jim Jordan (R-OH)—to vie for.

Also contributing to the dynamic is the conversation happening among congressional Republicans about pushing an amendment to the U.S. Constitution that would require the federal government to maintain a balanced budget—in other words, prohibiting Congress from spending more than is collected in revenue. The idea for this balanced budget amendment is not new, but the new-found momentum for pursuing it comes from an alleged agreement that Speaker Ryan made with Chairman of the Republican Study Committee Mark Walker (R-NC) last fall, in order to secure enough votes from the conservative wing of the Republican Caucus to pass a procedural vote that was used to pass the tax reform bill. Given that this would be a constitutional amendment, the measure would require a two-thirds majority in both the House and Senate to advance. The House did ultimately put this up for a vote last Thursday, but it failed on a mostly party-line vote of 233-184 (falling short of the 290, or two-thirds, threshold).

Package of Bills to Reform IRS Advances Out of Committee

On April 10, House Ways and Means Oversight Subcommittee Chair Lynn Jenkins (R-KS) and Ranking Member John Lewis (D-GA) introduced a package of nine bipartisan bills that aim to “improve the taxpayer experience” by reforming the Internal Revenue Service (IRS), according to a joint statement from Reps. Jenkins and Lewis.

Included in this package is H.R. 5443—which would require all tax-exempt organizations to file their annual returns (the Form 990, in the case of 501(c)(3) charitable organizations) electronically. It would also require the IRS to make these returns publicly available in a machine-readable format. The Council has long supported electronic filing of Form 990s, so long as policymakers actively engage charitable organizations in the implementation process.

The Ways and Means Committee held a markup of these bills the day after they were introduced, and voted to advance them to the House floor. The House voted yesterday to approve all nine bills with unanimous (or nearly unanimous, in some cases) support.

Assistant Treasury Secretary for Tax Policy David Kautter—who is currently pulling double-duty, serving also as the Acting Commissioner of the IRS until the Senate confirms a successor to former Commissioner John Koskinen—echoed many of the sentiments of the House Ways and Means Committee that certain IRS reforms are needed during his testimony before the Senate Finance Committee last week.

Last week, the U.S. Department of Treasury announced the first round of designated “opportunity zones” in 18 states. Opportunity zones are geographic areas designated using low-income community census tracts (a map of eligible communities can be found here), wherein exist tax incentives for investors that re-invest their unrealized capital gains into “opportunity funds.” The program allowing for this designation—which aims to spur economic development in economically underserved communities—was passed into law under tax reform in late 2017.

The zones that were announced last week will hold their designation status until Dec. 31, 2026, so long as all the conditions of the program are met.

The philanthropic sector should hopefully have additional clarification soon on the new unrelated business income tax (UBIT) that took effect with the passage of the recent tax code overhaul. According to BGOV, “The IRS will issue guidance on two nonprofit-related changes included in the tax law by the end of June, a Treasury official said. The guidance will instruct nonprofits on how to calculate unrelated business income separately for each trade or business, a ‘bucketing rule’ included in the 2017 tax act (Pub. L. No. 115-97).

The Internal Revenue Service will also issue guidance on a 21 percent excise tax on executive compensation of more than $1 million, Elinor Ramey, an attorney-adviser in the Treasury Department's Office of Tax Policy, said March 23 at the Washington Nonprofit Legal & Tax Conference. Both projects are in the IRS and Treasury Department's 2018 priority guidance plan. The changes will hit large nonprofit organizations, such as colleges and universities, that have complex accounting structures and often employ several executives paid more than $1 million.”

On April 12, the U.S. Department of Treasury and the White House Office of Management Budget (OMB) announced that they had reached an agreement on the roles each agency will play on the implementation of certain tax regulations. These roles were specified in a Memorandum of Agreement (MOA) that was released with the announcement. Specifically, the MOA provides the terms in which OMB’s Office of Information and Regulatory Affairs (OIRA) will review certain tax regulatory actions that affect the economy.

The press release from Treasury states, “Under an agreement adopted in 1983 and reaffirmed in 1993, some Treasury regulations were subject to a review process different from other regulations issued by most executive agencies. Over the decades the agreements had been interpreted to exempt essentially all tax regulations.”

This agreement is important because it lays the groundwork for how regulations to implement the new tax law will be drafted. Despite this progress, Acting IRS Commissioner David Kautter noted that “Providing guidance on the new tax law will [still] take at least a couple of years.”

Happening in the States

Exclusive from our colleagues at the National Council of Nonprofits.

Foundations in Crosshairs for State Oversight

Wisconsin lawmakers are calling for stricter accountability and transparency of public and private foundations after a nonprofit organization affiliated with the University of Wisconsin – Oshkosh filed for Chapter 11 bankruptcy. The UW-Oshkosh Foundation fell into financial problems after five development deals resulting in $14.5 million in debt, and the University of Wisconsin System refused to fill the budget hole. The Legislative Audit Bureau recommended more accountability and oversight of “similar, private nonprofit foundations associated with UW campuses,” including requiring university chancellors to file annual financial statements and independent reviews of foundation reports.

Similar questions by policymakers in 2016 led Connecticut to require the UCONN Foundation, once its endowment exceeds $1.5 billion, to report annually its spending to the General Assembly by providing Form 990 filings, audited financial statements, and the names of donors unless the donor expressly requested anonymity. The bill had failed previously due to a provision that would have included the state’s freedom of information laws to the private entity. Separately that year, members of the University of North Carolina system Board of Governors questioned the lack of transparency at the 17 foundations operating on 11 campuses that raise money for their associated universities. Of particular concern to legislators were the investment practices of the foundations and how they interacted with university finance and property transactions.

Legislation pending in several states would allow taxpayers to claim a new or expanded tax benefit for their charitable contributions.

The new federal tax law imposing a $10,000 cap on the amount that individuals can deduct for their state and local taxes (SALT) will affect more than just the eight or more states implementing or considering SALT workaround legislation, according to data from 2015 compiled by the Pew Charitable Trusts. Filers in 19 states and DC averaged deductions more than the cap will allow this year. The report shows that taxpayers in states that do not have a high deduction average may be affected more by the cap than filers in states that do have a high deduction average. It remains an open question whether such workarounds will be deemed lawful by the IRS. To date, New York is the only state to have enacted a new law to implement a workaround, creating two new state-operated Charitable Contribution Funds, one for health care and the other for education.