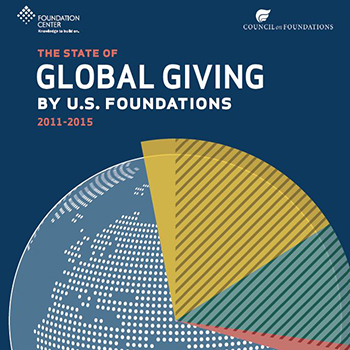 The Council on Foundations and Candid (formerly Foundation Center) analyzed how U.S. foundations supported international communities, nonprofits, and programs between 2011 and 2015 for our report, The State of Global Giving by U.S. Foundations: 2011-2015.

In addition to a detailed analysis of trends by issue area, geographic region, population group, and donor strategy, this analysis also relates these trends to key events and developments, including the adoption of the Sustainable Development Goals, the spread of Ebola in West Africa, and the increasing legal restrictions faced by civil society in countries around the world.

This report is the latest in a decades-long collaboration between Candid (formerly Foundation Center) and the Council to regularly analyze trends in international grantmaking by U.S. foundations and the 10th jointly published analysis since our collaboration began in 1997. You can see the full collection of reports we’ve co-published about international grantmaking by US foundations since 1997 on IssueLab.