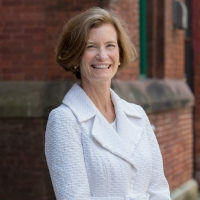 Prior to joining the Foundation, Jane was Chief Community Officer at the YWCA of York, Housing Director at Citizens Planning and Housing Association in Baltimore, MD, and a caseworker, and a housing counselor for a variety of agencies in Baltimore and Erie, PA. Jane holds a Masters in Social Work from the University of Maryland, Baltimore, and a Bachelors in Finance from Fairfield University in Connecticut.